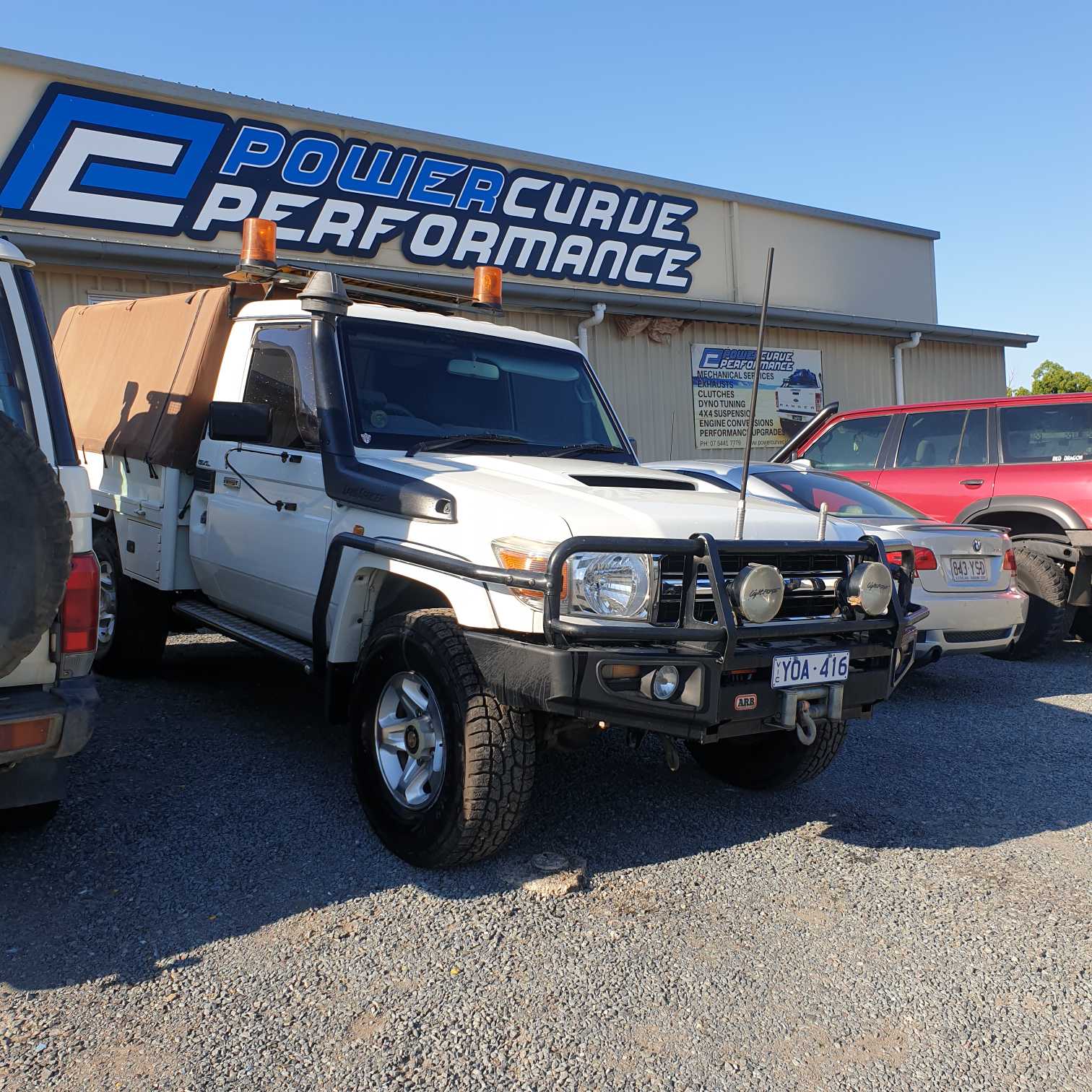 Gerard was referred to Power Curve Performance from a valued friend and mechanical professional in Hervey Bay.  Gerards 79 series Landcruiser concerns are low power and a high whistle.  Knowing that Gerard was coming from Hervey Bay we had some concerns in regards to him returning home the same day.  Based on 79 series landcruisers we see every day the diagnosis over the phone would be to jump to a failed or chipped turbocharger.

Why we don’t diagnose over the phone

Our concern based on 79 series landcruisers we see every day we can diagnose by ear, feel and then sight a failed turbo in minutes.   So we had a feeling this could be the unfortunate case based on what Gerard was hearing, seeing, feeling on our phone conversation.  The first thing Gerard asked us was what do you think is wrong with my 79 series, how long and how much.  Now we had a conversation about the turbo and he felt that was probably the issue.  What we experience all too often is mechanics take this high-value repair and pop that into the equation and replace this part without properly diagnosing the vehicle.

So we did not offer a price to repair as Gerard had already booked our technicians time to inspect and it is important that the price reflects the issue.

As well as the lack of power and whistle Gerard also noted he had an engine light present.

The PCP team scanned the 79 series and discovered what we felt the issue was… We went for a dirve with Gerard and assured the noises we are hearing was what he was hearing.  What we very quickly discovered was that if we had jumped to the idea that a $3000 turbo was the issue we would of over-quoted Gerards simple issue by $2890.

What we found was that the map line was cracked creating the normally 147.9hp standard Landcruiser to pull back to 64.8hp.

The whistle was simply the snorkel head had come loose and created a whistle when the air was caught in it driving along.

So for a short amount of time and a lower price we were able to diagnose and repair the 79 series back to its former glory.

This is why you will find Power Curve Performance never give advice or diagnosis or quote a fault over the phone.  by doing so we are doing an injustice to both your self, ourselves and our brand.

If we told Gerard he needed to come down and have his turbo replaced and he went to another mechanic to resolved his issue at $110 we would look like royal rip off artists.  This is why we are sticklers to our process.

The problem is fixed, right?

So you would belive that Gerards 79 series is fixed right?  Wrong.  Yes, we have resolved the engine light, whistle and the no power.  However Gerard had power before the fault was present, he even has a DP chip to give him more.  Talking and listening to Gerard he was still unhappy with the power of the vehicle.  This is not uncommon with 79 series Landcruiser owners.  While we can see bellow Gerards 2011 79 series Landcruiser has a standard horsepower of 147.9hp. The issue is not the top end power the issue is the torque.  At the rear wheel, the 79 series has a flat curve of 300 NM of torque at the rear wheels.

Chatting to Gerard he explained how prior to the fault occurring he has to change back gears with a v8 engine to drive up an incline.  when he added the time he tows his caravan this is 10x the frustration.  This is a frustration and issue that you do not expect to have when you purchase a v8 engine.

To resolve this issue he did some research and installed a 3″ exhaust and a DP Chip.  This did not fix his issue and here is why.

The chip did not fix the issue of the v8 Landcruiser

If you draw your attention to the curvey dyno sheet above we are looking at the green and purple dotted lines.  The dotted lines are the torque lines.  The horsepower increase for the chip to the standard engine is 10.8hp.  That’s a fair amount for the $ spent.  The actual torque curve improves where it matters at 1800-2000rpm at a max of 50nm.  Not too bad but still not a lot.  The actual big issue was that even with the chip Gerard is still flicking back the gears and not feeling the power others discuss as one of the big buy reasons of the 79 series Landcruiser.

Listening to our customers concerns and what he was looking for from his LandCruiser.  Jesse our technician took Gerard for a drive in one of our land cruisers here at Power Curve.  On a team catch up later Jesse had a little laugh at Gerards response to the power.  He described it as the normal buyer who doesn’t really want to let the sales guy know he likes the product but the works “Holley Fu#k!” definitely came out of his mouth.

So Gerard did come back in and we upgraded his clutch and tuned the 79 series Landcruiser before he went home.  So what is the difference and why the need for the Holley Fu#k!

The difference between the chip and the power although the tune hits over 200hp is the torque.  You can have all the power in the world but the torque where you need it is the world of difference.  We see this a lot with turbo selection when upgrading.  The turbo you select can define the difference of the performance.  We can line up to vehicles with the same power however the range the torque is coming in at will be the difference of where you end up at the end of the day.  The way this reflects for Gerard and others towing just like him is where the torque is will depend how easily it is for him to tow his van up a hill without multiple gear changes.  Given that the van meets his gcm for the engine and that he has a v8 not a smaller engine where the torque gain capacity is not the same.

Is your 79 series Landcruiser underpowered?